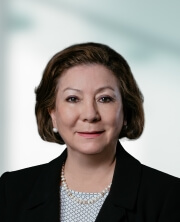 Located in the Abaco office, Ximena Thompson is Of Counsel at Higgs & Johnson and is a member of the firm’s Real Estate and Development practice group.

Ximena is an experienced practitioner in the areas of Real Estate Law, Aviation Law, Commercial Law and Litigation. Specialising in foreign direct investment, the sale and acquisition of hotels and resorts, and real estate and project finance for more than 20 years, Ximena’s clients include international and local property developers, large international industrial, commercial and service companies, and national and overseas government agencies.

On individual sales and acquisitions, Ximena has acted on behalf of multiple high net worth private clients in respect of their acquisition of properties. She has provided legal services related to Bahamas Government regulations and applications, including all aspects of Heads of Agreements and Hotel Encouragement Act Concessions. Ximena has represented a number of major international airlines with regards to all legal aspects of their operations in Colombia, and liaised with national aviation authorities in both Colombia and The Bahamas. She also participated in the negotiation of air traffic rights between The Bahamas and Cuba on behalf of the Bahamian Government.

Ximena earned a Law degree in 1981 at the Université Paris 2 Pantheon-Assas and in the following year completed a Master’s Degree (DESS) in Administration and Cooperation of International Organizations at the Université Paris 1 Pantheon-Sorbonne. She earned diplomas in Property and Trusts as well as Common Law and Obligations, Laws of Contract at Holborn College in England in 2004 and 2005. Ximena was admitted to the Colombian Bar in 1986 and became a Registered Associate in The Bahamas in 2001.

Ximena is fluent in English, Spanish and French, and has a working knowledge of Italian.

New Legislation Welcomed for the Execution of Deeds in The Bahamas

Higgs & Johnson Praised for its ‘Quality of Advice’

Higgs & Johnson continues to be regarded as ‘one of the most prominent firms’ in the market according to the...
Printed from the Higgs & Johnson website: higgsjohnson.com. All rights reserved.